Selaginella willdenowii is a lycophyte (a relative of the ferns) found in tropical and subtropical America of particular interest because of its iridescent blue leaves. Several species of fern and a few flowering plants also produce leaves with a similar iridescent blue colour. The function of this iridescence is not really known, but one thing all these plants have in common is that they live in very low light levels in the understorey of tropical forests. This has led people to speculate that the blue colouration might act in some way to optimise capture of wavelengths of light that are useful for photosynthesis (the process by which plants make sugar from sunlight and carbon dioxide). However, our results show that the blue leaves of young Selaginella plants do not capture any more sunlight than the green leaves of older plants. While we still don’t know what the iridescence is for, one intriguing idea is that it acts as a form of camouflage. Perhaps by colouring the young leaves so that they don’t look much like leaves the plants protect these juicy young tissues from herbivorous animals?

The iridescence is caused by a layer structure in the upper epidermis of the leaves and can be seen in this cross-section taken with an electron microscope (scale 500nm). The layers are part of the cell wall, the rigid box that encloses all plant cells. The cell walls of all plant cells are made of cellulose. In this case the cellulose is laid down in layers with different amounts of water in each layer, and this produces interfaces between the layers that reflect blue light. 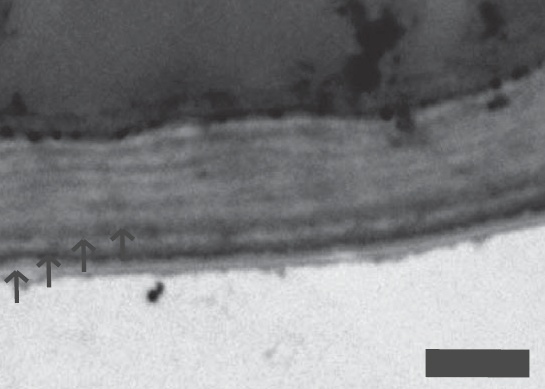 Similar layers are found in the scales of Morpho butterflies and give rise to their strongly iridescent blue wings. In this case the multilayers are produced on ridges of chitin secreted from the wing scales. These ridges look long and straight from above, but in cross section they look like Christmas trees – and the “branches” of the Christmas tree provide the multilayer effect. The Morpho butterfly is such a brilliant blue that it is said to be visible a quarter of a mile away. 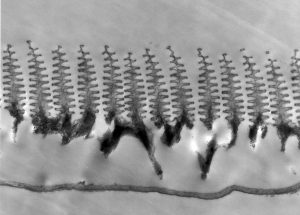 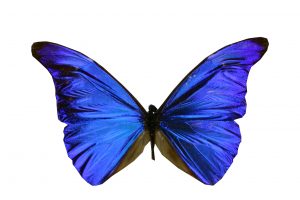