How nature dresses to impress

In conjunction with our stand at the Royal Society exhibition in London this website provides additional resources on the science behind some of the most striking colours in nature. Please explore !

Because they can’t move, plants use animals to carry pollen from one plant to another. Some flowers, particularly weeds, can self-fertilise, but lots of plants can’t – they might even be dioecious having separate male and female individuals – like holly bushes. To attract pollinators flowers offer a reward – usually sugary nectar, but often protein-rich extra pollen as well. Animals visit flowers to feed, and generally the pollination is accidental.
The petals (and sometimes the sepals) of flowers act as adverts, making it easier for animals to spot rewarding flowers against a green background. These adverts can be based on scent and on colour. Flowers are very rarely green!

Pollinators like bees see things differently to humans. Human eyes distinguish colours in only a small part of the solar spectrum, that we call ‘visible’. We distinguish different colour because our vision is trichromatic. Different animals perceive colours differently due to variations in spectral sensitivity. Bees for example have also a trichromatic vision like us, but with colour sensitivities shifted to the ultra violet range. Whilst other pollinators like small birds are more sensitive in the infrared region of the spectrum. 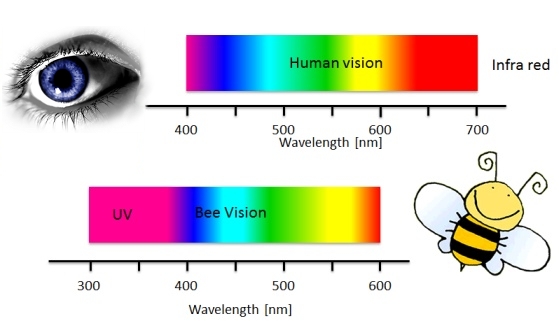 Below are two pictures of the same daisy (Arctotis fastuosa), the one on the left shows the ‘visible’ colours that humans see. The picture on the right is taken with a UV sensitive camera which demonstrates how different the same flower would look to a bee. 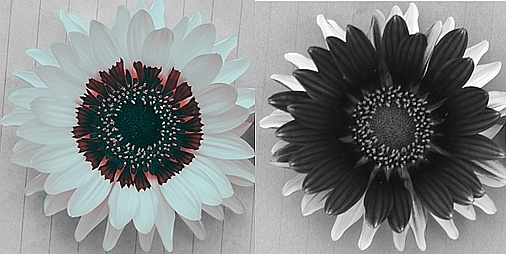 Other flowers like Mentzelia lindleyi and Hardenbergia violacea also show similar differences in appearance when viewed with a UV sensitive camera. The images below show these flowers in visible light (left) and UV (right).

Mentzelia lindleyi (Lindley’s blazingstar, Evening Star, or Blazing Star) is an annual wildflower found in the Coast ranges and San Joaquin Valley of California, and in Arizona. 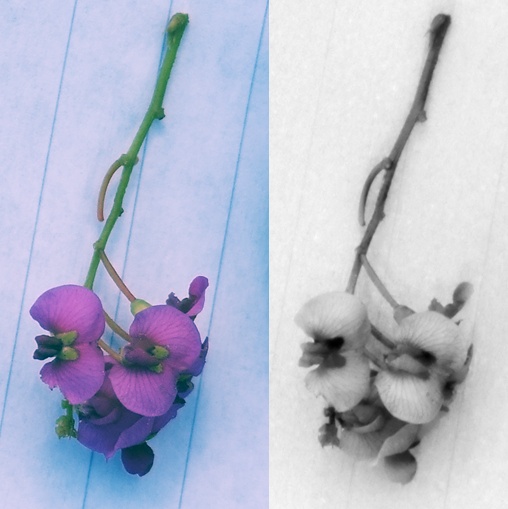